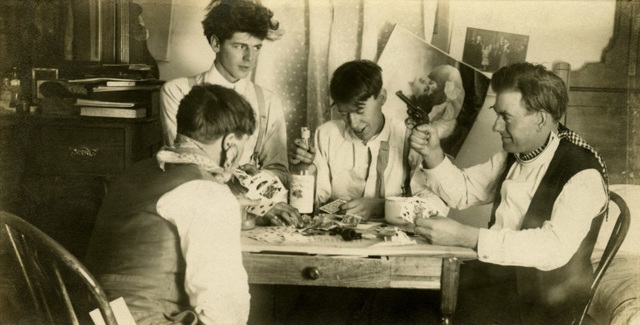 Ruth and Aggie left the park and headed back to the coach house.

“Do you think the card game will be over?” asked Ruth.

“No, no, the game will go on for hours and hours. It will take John ages to lose all that money you saved up,” said Aggie.

And they turned into the street past the potholes and run down mansions where each room help a different family and where ragamuffin children played in the road. Outside the last mansion in the row was a line of rather grand coaches and even an automobile.

“Who are these,” said Ruth.

“That will be John’s friends,” said Aggie. “Or their coach men at least”

A group of children approached one of the horses. “Clear off,” cried the coachman and flicked his whip at them, catching one of the girls on the leg.

“What a beast,” said Ruth as the children skipped away.

“Aye, that will be Lord Hawthornetree’s coach man. To be honest, I’m no so fond o’ John’s friends and him least off all.”

Aggie held the gate open and Ruth pushed the perambulator with the twins in to the garden, along the path and round the back to the old coachman’s cottage that was Aggie’s home.

In the cottage, John was sitting at the table with a large pile of coins in the centre.

John indicated a thin aristocratic gentleman with a top hat and a monocle.

Then he turned to a rather portly, pale-faced man dressed in a white robe decorated with black symbols.

“Pleased to meet you,” said the portly little man. “Most people call me the evilest man alive.”

Ruth took his extended hand and shook it.

“And this,” said John pointing to the fur clad figure across from him, “is Madam Dingbatski.”

“Charmed,” came a mumbled voice from somewhere within the furs.

A quick scan of the table showed exactly what was going on. John was losing, losing bad and the three others where cheating, cheating bad.

In spite of the huge fortune that Ruth had accumulated and John had decided to gamble against her wishes, John was down to his last few coins.

“John,” exclaimed Aggie, “this is my house.”

“Alright,” said Lord Haw-Haw and pushed a large pile of coins over to John. “Hopefully your luck will change soon.”

Bur John’s luck did not change. Very quickly it looked as if he was going to lose everything including the house. Of course, it was not really that surprising. Haw-Haw pulled ace after ace, Crowcry pulled Queen after Queen and Madam Dingbatski double shuffled again and again.

“We need to do something or we’ll lose the house,” said Ruth.

“Well, first off get honest John out the way,” said Ruth.

“I’ll deal with that,” said Aggie. “John,” she shouted, “Mummy needs your help.”

No sooner were the words out John’s mouth then has Amazonian mother shot out an arm grabbed him by the ear and dragged John from the table.

“Oh dear,” said Ruth, “why don’t I sit in while my husband is detained.” Ruth took the cards and flicked them around her hand into two fans. “My deal I believe.”

In the next room, Aggie sat on John to prevent him getting back into the game. In the meantime Ruth won game after game. Soon she had won back all John’s money and more. It was her money really.

John’s friends tried to cheat harder and harder, but no matter how hard they tried, no matter how much they cheated, Ruth cheated harder, stronger, better. And won over and over again.

“Beginners luck,” lied Ruth smoothly. “Now shall we play one more hand? I believe it is my turn to deal.”

“Unfortunately I will need to depart,” said Alister, “I have a séance to attend at Highgate Cemetery.”

“And I have to go, I’m leaving for Tibet in the morning,” said Madam Dingbatski from her pile of furs.

“So that would leave just you and me,” said Ruth staring at Lord Haw-Haw. “I suppose that means we’ll have to do this again some other time.”

“Or we could play blackjack?” suggested Ruth, “If your short of money, I could lend you some against your car, or perhaps you have some Jewellery you could use?”

“Yes,” said Lord Haw-Haw and took a ring from his finger and placed it on the table.

Ruth gasped, but quickly recovered her composure. There on the table was a gold ring in the shape of a coiled serpent; a cobra poised to strike with two fangs bared and ready to bit.

Could Lord Haw-Haw be a member of H.I.S.S.S.S. the secret society that were attempting to hunt down Ruth and John and murder them?

Fortunately, before Ruth could do or say anything, Aggie entered the parlour with Charlotte and Clementina on each arm.

“That’s quite enough for one night,” said Aggie. “John is indisposed and the twins need their mother. I suppose you better go now, your lordship. No doubt you’ve got some lording to do elsewhere.”

From the tone of Aggies voice, it was clear that there would be no point arguing. Lord Haw-Haw rose up and turned to leave. As he did so, one of the twins, Clementina Ruth thought it was, she could never tell which was which, opened her eye and stared at Lord Haw-Haw. Ruth had never seen so much malice in a single glance, and evidently, neither had Lord Haw-Haw. The poor man turned white and bolted out the door.

“Where is John?” asked Ruth.

“He’s tied up at the moment,” said Aggie.