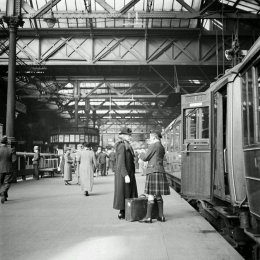 Ruth took out her compact mirror and inspected her appearance. She was pretty enough for sure and her make-up was immaculate. Her hat was slightly shabby but decent. She could easily pass for a school teacher or perhaps the wife of a tradesman rather than a pregnant housemaid, who had been curtly dismissed and sent home in disgrace.

She pulled on a pair of very fine kid leather gloves that she had taken from the mistress’s top draw before leaving. Taken not stolen, she told herself; they were scant compensation for the last month’s wages that the Dunns had refused to pay when they dismissed her from the house. Fortunately she had some savings, otherwise how would she have got back home. Most of her money had come from her fiancé, William to pay for her boat passage to Australia to meet up, but it couldn’t be avoided, she would need every penny now. Besides, she couldn’t go to Australia now, not in her condition. She would have to wait for the baby to be born and then travel.  Ruth was not too disappointed, she was not keen on Australia, or William for that matter; too primitive, Australia and William both.

The train continued onwards taking her closer to home. Ruth considered how surprised her mother would be when she turned up at home. She had written to her mother and sent it first class, but the letter wouldn’t arrive until tomorrow, that would be too late. Surprised, thought Ruth, she’ll be more than surprised. She didn’t even want to think about her father. Cross that bridge when you come to it, she told herself.

At the next stop, a tall gentleman entered the carriage and sat opposite her, even although there were plenty other seats. Ruth bristled slightly at the intrusion, and turn away. But out of the corner of her eye, she could see that he was younger then she first thought. He was grinning, and from the smell, he had been drinking.

Ruth did not answer. The man was both drunk and intrusive.

“Have you got a first class ticket,” she asked. “Second class carriages are to the rear.” Ruth was travelling in first class, even although ticket was for second class. But: if you looked first class, then no one would check, Ruth thought.

The man swayed from side to side as the train rattled along the tracks and from his pocket he withdrew a second class ticket and waved it in front her.

“First class paid in full,” he told her. And then much to her annoyance, the man withdrew a packet of cigarettes from his jacket, lit one and proceeded to blow smoke throughout the compartment.

She coughed loudly and waved her gloves in front of her, but he didn’t take any notice.

Ruth snorted, pretending to be annoyed. But he was right, she thought; she was pretty. Too pretty to waste on a sheep station out in the middle of nowhere in Australia.

“You got a boyfriend,” he asked?

“None of your business,” she replied, trying not to laugh as he made a face.

“Sorry,” he said, holding his hands up and grinning all over his drunken face.

Do I have a boyfriend, she thought? What will William think once he knows about the baby? She could guess the answer to that. It would mean the end of any money from Australia, not that it was much anyway.

“My name’s Jonathon,” said the drunk man, “Call me John.” He held out his hand for her to shake. Ruth ignored his outstretched hand and turned to look at him. He wasn’t exactly handsome. His face was too long and his ears stuck out, but he looked strong and healthy. A quick glance at his outstretched hand showed that he was no stranger to hard work.

“I don’t have a boyfriend,” said Ruth. “Not any more, he’s gone to Australia.”

“No wonder you dropped him, going to that god forsaken place,” said John.

“And what about you,” asked Ruth? “Do you have a girlfriend”

“Where are you going John,” Ruth asked.

He handed a white sheet of paper to her. It was the deeds for a greyhound track.

“Won it at cards,” he told her. “Now I’m going to manage it and.” Here he stopped and fished a small leather bag out of his pocket. “Enjoy my winnings.”

Ruth could guess by the size and shape of the bag that it must be full of sovereigns. She calculated there must be about thirty of them. That was a small fortune even without a greyhound track.

Perhaps, she thought to herself, John was not so unattractive.

“There’s enough there for a hotel room,” John winked at her.

“They’ll be none of that talk,” said Ruth. “I’m a respectable young lady. Keep it up and I’ll call the guard.” But Ruth knew she couldn’t call the guard, not with only a second-class ticket.

John looked a little ashamed and muttered something under his breath.

“I didn’t mean it like that,” he said. “I mean a room for you, not for us, when we get to London. I’ll put you up. If you’d be my girl. Unless you’re heading off to Australia. There’s plenty money there. There’s enough to buy you a dress and put you somewhere nice and respectable.”

Ruth looked at him. “Is there enough for a wedding license,” she asked?

“Could be,” said John, jingling the coins up and down.

“I’m not blind,” said John, who suddenly didn’t seem quite as drunk as before.

Ruth reached out and took the coins in her gloved hand. They felt heavy and comforting. She weighed things up. Thirty gold sovereigns in one hand, and in the other, nothing; not much of a choice she told herself. Thinking about her parents and Australia.

“What did you do before you won this at cards?” Ruth asked.

The train drew into the station. This was her stop. There would be no one there to meet her. The train paused, and waited letting steam fill the platform.

“No it’s not,” said John. She noticed that he had nice eyes.

“You’ll need to buy me a new ticket,” Ruth told him.