This week I’m delighted to host Iseult Murphy and to give you an oppertunity to read and extract from THE ZOO OF THE DEAD and other stories. 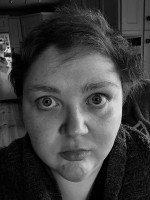 Iseult Murphy lives on the east coast of Ireland with three cats, five dogs and a couple of humans. She writes horror, fantasy and science fiction short stories and novels. Her work has appeared in over a dozen venues, including Alban Lake’s Drabble Harvest, Newmyths.com and the Drabblecast audio fiction podcast.

“Why am I doing this?” Sarah wondered, as she walked down the sidewalk, checking the shop fronts. “Childless, husbandless and I’m following my brother’s advice to visit a toyshop. I’m too old for toy shops.”

She stopped. Number forty-six. It matched the address on the piece of paper John had given her.

The shop windows were blacked out and the word ‘Topper’ was written in small gold letters on the doorframe.

“I hope it isn’t an adult toy store.”

The last thing she needed was her brother meddling in her sex life, or lack thereof.

She pushed open the door and went inside. The shop was warm and smelled of peppermints. A large man with red hair sat behind a counter watching an old black and white television set. He winked at Sarah. She hurriedly concealed herself in the maze of dusty shelves that divided up the shop floor. She was relieved to see they contained children’s toys

The first aisle was full of action figures, with words like ‘Success’ and ‘Instant Attraction’ written under the cellophane windows.

Further from the door the shelves were stacked with old-fashioned glass sweet jars. Sarah peered at them. They appeared to be full of tiny fairies, their gossamer wings ready to crumble into dust at a touch. Another jar was stuffed with unicorns, no bigger than her hand, each frozen in a different posture.

“They must be made from sugar,” Sarah thought.

The last aisle was stacked with bright rows of paint bottles. She’d loved painting when she was a child, smearing her hands with different colors and printing them across sheets of thick construction paper. She picked up a pot of blue and was surprised to see ‘Banshee’s Cry’ written on it in curling black letters. A silver pot next to it was called ‘Angel’s Voice’. She didn’t remember them having such exotic names when she was little.

She went back to the action figures and ran her fingers lightly across the boxes. How she longed to buy one for a child, but her little angel had been too fragile to make it into the world. John said there would be plenty of time for her to have another go, but what did he know? Brothers.

A bright pink box caught her attention. She picked it up. It held a doll with dark skin and long black hair. Her face was beautiful, lit up with such euphoria that Sarah felt jealous looking at her. ‘Happiness’ was written on the label.

“I want to feel like that again,” she thought.

She carried the doll to the counter.

“It’s not for sale,” the man said. “Nothing in this shop is for sale. You want that doll, you have to give me something in return.”

He looked Sarah up and down and leered.

“I don’t want your body. Give me something you no longer need. Give me a part of yourself that you don’t want anymore.” He winked at her.

She shook her head.

“You know, lady, a part of you that you’ve never liked and always wanted to get rid of. Your off-key voice, perhaps, or your urge to control things.”

Sarah frowned. A range of questions rushed through her mind, but they were overwhelmed by one thought. What was it that she longed to be rid of? The answer didn’t take long to arrive.

The man rubbed his hands together. “Good. What will you trade me?”

“My memories,” Sarah said. “I don’t want them anymore.”

The man licked his lips.

“A fair price indeed for happiness.”

“Ok, how do we do this? Is it a counselling situation? Do I tell you my memories and you record them onto disk or something?”

“It’s not that complicated.”

He reached under the counter and withdrew a doll. Its face was blank and featureless. He flipped a hinge on the top of its head and held it out to Sarah.

“Breathe in all the memories you no longer want.”

Sarah took the doll and held its head to her lips. She thought of her nights alone in the house, weeping in the empty nursery. She remembered her divorce, and the bitter, hateful words she had exchanged with Mike. She roamed further back. She tensed at the memory of the miscarriage and the pain of losing her baby, but relaxed as she revisited the joy of finding out she was pregnant. The rest rushed out in one large gasp – the happy times with Mike, her wedding day, and the first day they had met on campus.

She poured all her memories into the doll. As she blew, the plastic skin darkened to match her own. Tortured features appeared on its face. When she was finished, she handed it back to the man. He sniffed the head before closing the lid.

He took a box from under the counter and slipped the doll into it. Written in glitter across the front was ‘Memories’ and in smaller letters ‘Bittersweet’. He put the happiness doll into a brown paper bag and handed it to Sarah.

Sarah thanked him, took the bag and went outside.

The sun was shining. She held a piece of paper in her hand with an address scrawled on it. Where had it come from? In her other hand was a brown bag. She looked inside and saw a doll in a pink box. She was a sophomore in college, she was too old for dolls.

She threw the bag and the note into the first trashcan she passed. Walking fast, she hurried down the street. She didn’t know where she was and she was late for class. She didn’t want to get into trouble.