Lyonie shouted after him: “Aye if you don’t find any werewolves doon the Gibby try Weir Street, there’s usually some hanging aboot the aff licence!” The three of us bust out laughing.

Good friend  the multi-talented BRIAN HERON, musician, songwtrighter, artist, writer and camapaginer for mental health and  social justice, shares his disturbing story of werewolfs, local history, and disfunctional familes. Originally posted on TALES OF THE OAK,  a local community  arts development project, you can read it here, if you have the nerve.

Thank you again Brian for letting us share you terrifying tale.

You can follow Brian on Facebook here to see, listen to or read more of his excellent work 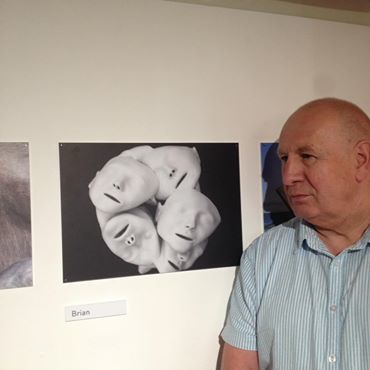 It was the 31st of October 1971 and I was 14 years old. The reason I remember, it was Hallowe’en! Lyonie, Codge and I had set up our tent on the hill behind Poplar Street in Gibshill, just on the other side of the old railway-line which ran from Glasgow to Greenock’s Princess Pier via the Kilmacolm line. The rail service was withdrawn in 1965 and just to make sure, the famous “Nine Arches” viaduct (which at 480ft long, sat 100ft above the Devol Burn) was demolished by explosion in 1970. This scene of carnage was just 10 minutes walk from our campsite. Today, (October 2012) the old railway line is now a cycle track.

Why camping? Who knows! Three boys rushing towards adulthood too fast, time to face fears perhaps? Whatever the reason, we decided to camp out that night. No school tomorrow, a nice fresh Friday evening under the ‘Gibby’ stars.

Around 10.30pm (according to the Kingston clock which hung above the Scott- Lithgow shipyard that provided employment for most of the men living on our housing scheme) a man appeared out of the dripping mist that descended from Donnie’s Farm. The farm that once sat majestically above our homes at the top of the hill but was now a burned out wreck of wood and stone. Donnie had died several years before and the farm was torched by some locals shortly after his death around 1967).
“What you doing boy?” the man asked.
“What’s it got to do with you?” replied Lyonie.
“Nothing” said the man as he smiled.
“Who are you?” I asked pushing my chest out in a vain attempt to fill the two sizes too big Wrangler jacket I had acquired from the back-greens of Cobham Street.
The man stated “Walter but you can call me Wattie!” as he put his hands on his hips and took a wee three step march. No! It was more like a jig or a dance than a march.
The three of use just stood there in our Doc Martin boots, denim jackets and Levi jeans attempting to look mean. Whilst Wattie calmly posed in his tweed jacket and matching bunnet. I remember thinking “Walter is bad enough but Wattie! This guy must be from Gourock?” It seemed to be an absurd stand off, three young boys and this man, poles apart in class, style and culture. Although he appeared to be quite a young man, in his early 20’s, it felt like we were generations apart.

Wattie went on to state he was a local farmer but that this was not his land.
“I’m a bit concerned that you boys are planning on camping out on a night like this” he gravely stated in his best, pompous tone he could muster. We all nervously laughed then Codge said “me and him jist live over the line there (pointing to the roof of both Lyonie and his close), all ave got ta dae is shout and ma two brawers and his two brawers (pointing energetically at Lyonie) will come flying over that fence!”

“That’s good! It’s great to have family” Wattie whispered as he continued to look concerned.
“Can I tell you boys a story?” he nervously inquired.
This guy was beginning to annoy me. He clearly was only in his early 20’s but no way was he a farmer, perhaps a farmer’s son? But not the owner of a farm! Looking back, what did I know about owning land? Here was I thinking like some agricultural connoisseur of farming and I didn’t even know one person who had bought a house never mind a farm! Anyway, he annoyed me.
“Aye“ said Lyonie as he winked to Codge and me.

I didn’t fear this man. There were three of us and despite our youth, we wouldn’t be slow if this guy got funny but he clearly made us uneasy. He proceeded to tell us a story about another farming family who lived in the area.

It was a stupid story about a farming boy who disappeared into the Greenock hills. No one could find him. Several years had passed then one day he returned to the family farm a shadow of himself! According to Wattie he had become a werewolf! Ate his parents! But no one suspected a thing! Except for Wattie of course!!!! His story was so full of holes you could drive the ‘Gibby’ bus through it if it ever bothered to turn up. Oh, and the boys name was Junior and he continued to live on the family farm. Great story eh?!

After he told his story Wattie said “I’ll need to get on my way. I’m gonna go down and see if I can catch Junior!”

Lyonie shouted after him: “Aye if you don’t find any werewolves doon the Gibby try Weir Street, there’s usually some hanging aboot the aff licence!” The three of us bust out laughing.
“He was ah rite” Codge stated.
I replied “Aye but if he took wan mair step towards ma crisps and juice add av’e taken his heed aff!”
“Aye Herny, sure” Lyonie responded as he seemed to be staring into the middle distance in his sage like way, eyes never leaving Wattie as he disappeared into the Gibby mist.

I too followed Wattie’s descent down into my scheme watching him walk down the lane between Cobham Street and Bell Street passing Gibson Street as he made his way onto Lansbury Street. Just as he got to the blacken, red brick wall ,that separates Irwin Street back-greens from Shankland Road the mist closed in, but I’m sure I saw him leap the wall in one jump!
“Did you see that?” I asked.
“Aye, he’s a way in ta your hoose!” Codge mocked.
I replied “He’ll no find much. Auld John’s away on the boats but he’ll gie that new ludger a oors a fright wie that that mad jaket and bunnet”.

Later that night around midnight (according to the Kingston clock) we heard the howling coming from the scheme. We all sat up, stared at each other as the moonlit tent glowed in an eerie light, paused and then laughed for the next 15 minutes. We were used to strange noises coming from the streets of Gibshill on a Friday night so this was no different. After that night we never seemed to talk about it again.

Life moved on. I got married, had a baby, called her Kirsty and moved to the new Gibby – Broadstone Avenue in Port Glasgow. I was now 25 years old but up to that point in my life whilst living in Gibshill every Friday night without fail I would hear the howling wolf pass by my back bedroom window, stalking the back-greens of Irwin Street and Lansbury Street howling his werewolf song. We always laughed and said it was someone coming back from Broon’s after a night of celebration but sometimes I would remember Wattie’s story.

It’s been 40 years since that strange Hallowe’en evening in 1971 but Wattie’s story has stayed with me. I’ve even written a song about it called “Juniors Farm”. I’ve now lived longer in Port Glasgow than I lived in Gibshill, but the Gibshill community spirit has always been strong and this year I was invited to a Gibshill reunion party in the Greenock town hall. I was asked to sing at the event along with a band of Gibshill musicians called “The Boys from the Hill” Codge played drums. It was a great night and after a few weeks I decided to check out the photos on the Gibshill Facebook.

As I did this something strange happened. I came across a photograph of Wattie! There he was sitting with an older man on a cart being pulled by two horses. Amazing! The photograph mentioned Bogston Farm, so I googled it and found a record in the National Library. I couldn’t believe it I had found Wattie, but there was a problem – Wattie was a young man in 1971 when he spoke to us on the hillside above Gibshill. The photo on the Gibshill facebook stated: “A photograph taken from Bogston Farm which is now the site of Gibshill housing scheme in Greenock” They started building Gibshill in 1934 and the first tenants moved in the same year. This photograph had to have been taken pre 1934 so the young man in the photograph would have been around 70 years old in 1971! I think the older man in the photograph is Walter Alexander senior and the younger man is Walter Alexander Junior. Perhaps Wattie was the Junior in his story!
What do you think?